As many of you may already know, our team started our own Twenty One Podcast last year. We have now recorded over 40 episodes and I’d like to put in writing some information that we shared on a recent episode, as well as in our North Gower Town Hall, on the subject of the Cranberry Creek Municipal Drain. Before I dive into that, though, please note that our recent Town Hall meetings are all viewable on our Team Twenty One YouTube channel and you can find our podcast on all podcast streaming services, including Spotify and Apple Podcasts.

There is enough history on this file that I could likely fill this entire newspaper and still forget a thing or two. In Episode 39 of the podcast, we cover municipal drains and focus quite a bit on the Cranberry Creek Municipal Drain in North Gower. Given that, I will be a bit more succinct in written form about the 126-year-old drain.

First constructed in 1895, the Cranberry Creek Municipal Drain lies just south of the village of North Gower and empties into the Rideau River just south of the village of Kars. The regulated portion stretches from about Second Line Road back to McCordick Road with several other municipal drains that feed into it. Over the years, improvements were made and the Engineer’s Report for the drain was updated. One of those updates, in 1969, led to the installation of a pump and dyke system. In 1991, it was deemed that the pump and dyke were insufficient, and an updated Report was drafted and presented to the landowners of the day. Ultimately, it was deemed the cost, at that time, was too high and work did not proceed.

In the subsequent two decades, the drain operated without the pump and dyke, which was actually in contravention of the governing Engineer’s Report, but I digress. Fast forward to 2013 where the area received some significant rain events after the fields had already been planted. With this came a renewed push to deal with the standing water in the fields along Third Line Road and Fourth Line Road. If you know the area, you will know there is a bit of a bowl effect and it becomes difficult to drain since the area is quite flat.

Under the Drainage Act, landowners have a right to request improvements to the drain and on September 10, 2014, Council appointed a drainage engineer to prepare a report to address the concerns of the landowners. This report would update the governing 1969 report mentioned earlier. It is important to note that the Drainage Act process is a lengthy one. Engineer’s Reports must travel through a number of agencies before being presented back to the community. As a result, our next update doesn’t come until the latter half of 2017.

The report was presented to the landowners and it was not without controversy. In the updated report, the watershed from the initial 1969 report had been expanded recognizing the other drains that feed into the Cranberry Creek and the various properties whose water eventually use the Cranberry Creek as an outlet. The Engineer’s Report was approved by Council in December 2017. Now, it is important to highlight that a Municipal Drain is not owned by the City. It is comprised primarily of watercourses that run on private property although roadside ditches may be included in the drain. Under the Drainage Act, the municipality has the responsibility to maintain the drain at the cost of the landowners but also to facilitate the relevant processes under the Drainage Act. As such, Council approved the report under this authority.

The appeal process for a Municipal Drain is threefold. In the case of the Cranberry Creek MD, we saw 107 appeals to the Court of Revision. The Court may only deal with assessments within the reports. Through this appeal process, some changes were made and assessed costs shifted whereby the majority of assessed landowners saw significant reductions in the costs to improve the drain. Those improvements include reinstatement of the pump and dyke system.

From that point, appeals may be made to the Drainage Tribunal under the jurisdiction of the Ontario Ministry of Agriculture, Food & Rural Affairs. There were just over 40 appeals to this body. After a lengthy hearing process, the Tribunal set aside the Engineer’s Report. What that means is that the report, as it stands, does not move forward. The Tribunal made some suggestions on a way forward but stopped short of addressing the concerns set out in the various appeals. The Tribunal does have the authority to change the report and allow it to proceed in a revised manner.

The third appeal body is the Drainage Referee, also under OMAFRA. No appeals were filed here. The likely scenario here would have been that those landowners wanting the work to proceed could have filed an appeal to the Referee. That did not occur. As a result, the Report falls back to the City along with the costs of the report and the appeal process. This is where we remain today.

In the coming months, our Drainage staff will bring a new report to Agriculture & Rural Affairs Committee to appoint an engineer to update the 1969 report’s assessment schedule and find a new way forward in response to the decision of the Drainage Tribunal. The fact remains that the drain exists and is not operating in conformity with the Engineer’s Report on record. Leaving the drain as is cannot be an option under the Drainage Act. It either must be maintained in conformity with the Engineer’s Report or abandoned. Given the number of drains that require the Cranberry Creek as an outlet to the Rideau River, abandonment is not an option either.

Either that explanation was as clear as the unmaintained mud at the bottom of Cranberry Creek or you now have a better understanding of the situation and the road ahead. Please do not hesitate to reach out if you have questions on this and feel free to give the podcast a listen on the matter as well. 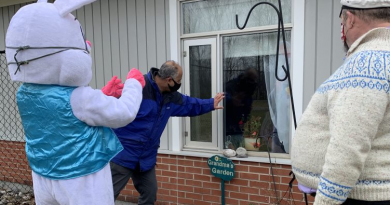