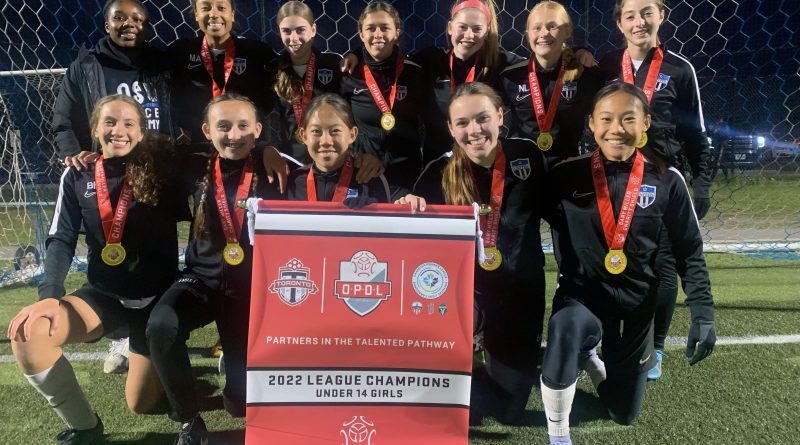 Special to the Manotick Messenger

Ottawa South United’s U14 girls are the Ontario soccer champions.

The team travelled to the Ontario Soccer Centre in Vaughn last weekend and came home with the 2022 Gary Miller Charity Shield after outscoring Brampton 4-3 in an exciting, high-scoring final.

It didn’t take long for OSU to get on the scoreboard. Brampton committed a turnover in the second minute and a long, looping shot from Mya Angus was mishandled by the Brampton keeper and found its way into the back of the net to give OSU a 1-0 lead.

The lead would not last long, as seven minutes, Brampton’s Niyah Noel-Gordon intercepted a pass in the OSU six yard box and scored to tie the game at 1-1.

Brampton took a 2-1 lead in the 17th minute, capitalizing on an OSU mistake. Brampton crossed the ball on a free kick but the attempt to clear the ball failed. Gabriel Istocki was there for Brampton to put home the loose ball.

OSU tied the score at 2-2 before halftime as midfielder Cindy Yang fired a beautiful shot from 20 yards out with the equalizer.

The action and goals would continue in the second half.

OSU took the lead in the 58th minute as Naomi Lofthouse put home a free kick to put OSU up 3-2.

Brampton had a chance to tie the score in the 53rd minute as a corner kick bounced into the box to Noel-Gordon, whose chance for the equalizer was stopped by a sliding tackle by defender Danielle Chukwu.

Moments later, OSU scored their fourth goal and went ahead by two as Angus struck a free kick near the corner flag and it looped into the net, beating the Brampton keeper from an extremely difficult angle.

U15 Girls Edged in Shootout

While the U14 girls won on Sat., Oct. 22, the U15 girls were in the provincial final the following day. After playing to a 1-1 draw, OSU came out on the short end of a penalty shootout, losing 7-6 to Markham SC.

It was OSU who scored the opening goal of the game in the 17th minute through Isabelle Chukwu who tapped in a second rebound after a long range shot from her sister Anabelle, and initial rebound shot from Francesca Mureta.

Markham nearly scored the equalizer from a free kick only three minutes later. The ball was crossed to Jayda Schoburgh at the far post, who headed the ball just wide.

Markham did however get the equalizer in the 30th minute through Naomi Phillips who converted a penalty shot.

The teams continued to battle in the second half.

It was OSU who had the first second half chance in the 58th minute. Anabelle Chukwu dribbled through a few players and fired a long range shot from 25 yards out that didn’t miss by a wide margin.

Markham replied in the 65th minute with a good chance of their own. A long free kick cross fell to Alessandra Geraneo who flicked the ball on net from within the six yard box but did not have much power on it resulting in a rather comfortable save.

It was back to OSU who had the next good scoring chance in the 80th after a cross to call-up Mya Angus at the back post. Her shot was hit just wide as she was at full stretch attempting to put the ball in the open net.

Once again, Markham counter punched and almost scored in the 84th minute when Kennedy Belfon was sent in on a clear breakaway as the defender tried to pinch the pass and missed. Belfon decided to keep the ball and shoot, despite a teammate streaking down the right flank unmarked, and in the end the shot was rather tamed and directly to the keeper who made a comfortable save.

The game would end 1-1 after fulltime requiring penalties where the dramatics continued.

Markham would miss their fist kick but were able keep their nerve and make their next three to give them a chance. OSU on the other hand, made their first three kicks giving them the opportunity to take the win with their fourth kick, but Olivia Busby made a great save to push the shootout to extras.

In extras, both teams made their first two kicks. In the third round, Markham stepped up and scored, forcing OSU into a must score scenario to keep the shootout going.

With the game on the line, OSU called on call-up Angus who helped Markham win the Girls U14 Finals the day earlier with two goals in the game. Unfortunately, Nusby would win this duel with a big save to give Markham the 7-6 victory on penalties.

OSU won the U14 Ontario championship by beating Brampton 4-3.

OSU won the silver medal at the provincial championships after losing to Markham in a shootout. 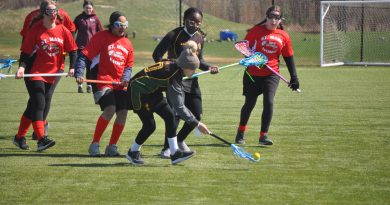 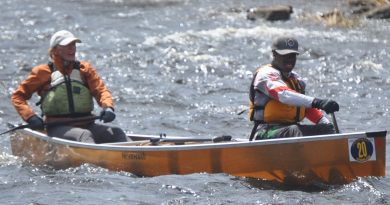 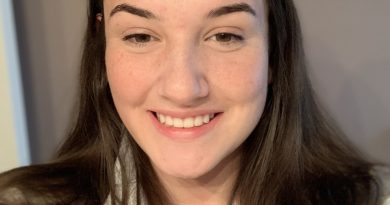